Our vision is to save lives by detecting blood loss, using a patented core technology that utilizes fiber optics...[read more]

It was a gloomy afternoon in Scotland, you know, the typical British weather with grey skies and it was raining. A 70 year old gentleman was getting ready for his dialysis treatment, and as usual everything went smooth.

He was just one of those exemplary patients that never caused any issues, was likeable, and easy to work with. He settled in the corner of the room covered with his blanket, as the nurse did the rounds.

Suddenly, some time into the treatment, a nurse realizes the 70 year old gentleman is not longer responsive, nor breathing. They try to resuscitate him, but unfortunately it’s too late. His venous needle had slipped out and fell in the bed, and as the machine continued pumping blood, it was returned into the bed rather than his blood stream.

The nurse could not notice the issue in time since the needle fell in the bed and was not visible with the blanket. The dialysis machine did not sense a pressure drop as the blood is pumped at such a force that the needle would have to fall to 2 levels lower in the clinic in order to trigger a difference.

Venous needle dislodgement is an accident. Regardless how long you have been on dialysis, how experienced your taping skills are, or if you are the patient or caregiver – accidents happen and they are often no one’s fault. But it remains a serious issue and if not noticed and acted upon immediately, the consequences can be considerable and even fatal.

You don’t plan for accidents, but you can minimize the risk and be safe

“Viewer discretion is advised – graphic images and blood. This is a controlled venous needle dislodgement to show the importance of acting quickly to prevent blood loss. The blood pump in the dialysis machine was turned off during the test, so the blood flow is substantially stronger during actual incidents. Please note that the Redsense system used here is of an older, now obsolete, model.”

During Hemodialysis blood is cleared from waste products when our kidneys fail to do so. A typical dialysis session lasts 4-5 hours and is completed 3 times weekly. Throughout the world 2.5 million patients receive hemodialysis.

During each dialysis session the blood access site is punctured with two needles. The blood is pumped through an artificial kidney where the blood is cleared from waste products before being returned to the patient in a loop.

Venous needle dislodgement, VND, is when the needle slips out and the returning blood is pumped onto the bed or chair instead of back to the patient’s bloodstream. As much as 400-500 ml of blood is lost every minute and if not detected immediately the consequences may be catastrophic and in some cases fatal.

The hemodialysis equipment used today are not equipped to detect VND reliably. The method of detection is limited to pressure measurements. When the venous needle is dislodged the pressure drop is often too small to activate the system.

VND can happen to anyone. Every attempt should be made to minimize the risk, and protection such as Redsense can be used to detect blood loss. 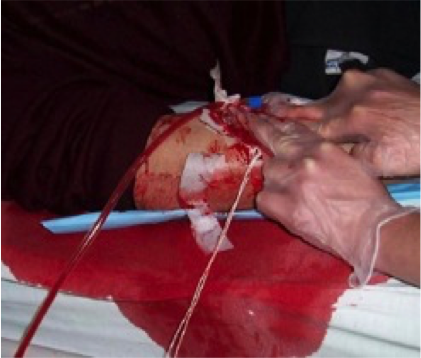